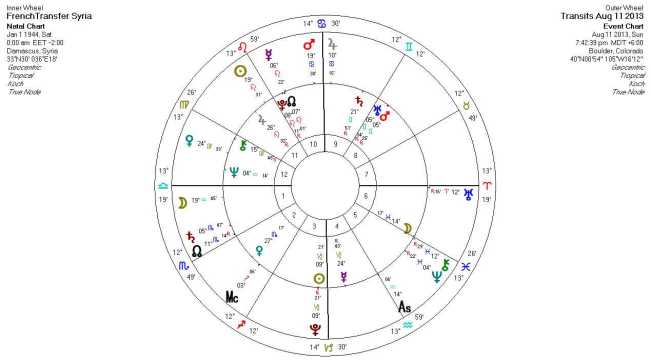 Click on the horoscope to enlarge it. The inner wheel gives the planetary positions for the French transfer to Syrian control (see previous installment). The outer wheel gives the planetary positions for August 11, 2013 (the current transits). Note the square between Uranus and Pluto in the outer wheel; note, too, Pluto’s position conjoined Syria’s Sun and Uranus’ position square that Sun. Go to my website – www.timtlyons.net – for a key to the symbols on the horoscopes.

These two planets made challenging aspects to the other planets in Syria’s yod (discussed last time) somewhat earlier. In any case, the events associated with the challenging transits of the outer planets may begin to appear before the transit becomes exact. In this, these transits seem somewhat like hurricanes: long before the eye of the story comes over you, and even before the first cloud appears, the waves start to get bigger; the weather-wise get their boats out of the water before the hurricane hits, for if you wait until the hurricane arrives, you’ve waited far too long. And like transits, the hurricane hits you in phases, with some periods of chaos and some periods of calmness: the eye of the storm brings calm, but you should probably use it to hammer more nails into your shutter instead of to convince yourself that you’ve gotten yourself to easy street.

Those of you who know how to measure aspects in astrology will notice that Uranus and Pluto square each other in the sky these days; they’ve been doing so since 2012 and will do so until 2015. These two planets made their previous challenging inter-aspect in 1965-1966, when they conjoined in mid-Virgo. Their challenging aspects always seem to bring social upheaval on a vast scale, as Uranus symbolizes revolution and new ideas and Pluto symbolizes power, whether psychological, financial, or political. Thus though the Arab Spring had its impetus as Jupiter and then Uranus entered Aries (in January and March 2011 respectively, though Jupiter came in and went out in between June and September 2010 as well), we can lay its continuity at the feet of the ongoing Uranus-Pluto aspect.

(We must distinguish, in all this, between transit-to-natal aspects and transit-to-transit aspects. The former term refers to times when a planet in the sky at present makes a challenging aspect to a specific position in a birth horoscope, in this case Syria’s. The latter term refers to times when the planets in the sky at present make aspects to each other. Transit-to-natal aspects affect the entity for whom or which one has cast a horoscope (in this case Syria); transit-to-transit aspects affect everyone, for they describe a collective situation.)

During Uranus-Pluto periods – and we all find ourselves in one at present, though people living in countries affected more directly will find Uranus-Pluto impinging more personally and provocatively – people experience the power (Pluto) of new, groundbreaking, or revolutionary ideas (Uranus), the rebellion against entrenched (Capricorn) power (Pluto), and attempts by the entrenched powers (Pluto in Capricorn) to co-opt circulating new ideas or new technical developments. (In this last category, we would probably put the NSA’s amped up surveillance.) Uranus, discovered at the time of the French and American Revolutions, brings a strong desire for immediate change. I often refer to Uranus as a symb ol of “The Jack Kerouac  Approach to Existence,” as Dean Moriarity, one of Kerouac’s characters in On the Road (here quoted from memory), says, ‘We don’t know where we’re going, but we’re going; we don’t know what it’s like there, but it’s not here, and we’ve been here, and we don’t like it.’  Thus the changes associated with Uranus arise with great insistence, brooking no opposition, but they mainly have to do with breaking away from a situation that one sees as undesirable rather than establishing a new system or method of organization that one finds more desirable. Sometimes this means change at all costs, but just as often, it means, at least in the minds of those seeking change, that they no longer wish to bear the costs of not changing, for it generally seems that the powerless bear those costs for no reason other than their powerlessness.

Uranus takes a dim view of structure, discipline, or responsibility, preferring the idea to the effort needed to work it out, preferring to live in the realm of ideas rather than in the realm of limitation. We see this tendency in the Greek creation myth, where Uranus, the creative sky god, fathers many children (the Titans) in Gaia the Earth Mother, but then finds them too ugly (i.e. he has an idea) and attempts to bury them back into the earth. Kronos (Saturn), one of these children, represents the responsibility, discipline, and willingness to work with limitation that Uranus wishes to avoid. We might also say that Uranus prefers to get away from karma, the world of cause-and-effect, for once we commit ourselves to action, we move into the world of limitation (astrologically connected to Saturn).

Pluto, on the other hand, symbolizes power in myriad forms: financial power; psychological power; the power of unconscious contents, particularly when appearing via projection. Discovered in 1929 within weeks of the crash of the New York Stock Exchange, Pluto also has to do with powerlessness and plutocrats; in 1929, this connection arose not only through the powerlessness of people largely as a result of the workings of plutocrats, but also of the powerlessness of some plutocrats themselves. Hitler’s to power during the same period shows us another side of plutonic power: the power of the underworld, particularly as manifest through collective psychological complexes that appear in the world as projections and that shape the behavior of millions of people. (Interested readers may wish to consult C.G. Jung’s Essays on Contemporary Events and Erich Neumann’s Depth Psychology and a New Ethic, both of which deal with the events of the 1930’s and 1940’s.)

Astrologers connect Pluto not only with the underworld, but also with hidden money and hidden resources, with the money held in banks or by plutocrats, and with the transformations of the collective psyche as indicated by, among other things, shifts in collective values and stock market movements. Thus Pluto’s connection to the crash of the New York Stock Exchange in 1929 and the worldwide financial crisis that coincided with Pluto’s entry into Capricorn in early in 2008.

Not surprisingly, then, Uranus-Pluto interactions in the sky appear on earth (so to speak) through events in which revolutionary impulses (Uranus) in the mass psychology (Pluto) challenge the workings of the powerful or plutocratic. Thus the uprisings of the 1960’s; thus, too, the myriad demonstrations challenging the power of Wall Street and the plutocratic 1%. However, Pluto in Capricorn gives coercive power to hierarchies that can co-opt and swallow new ideas just as the underworld draws all things to itself.

A few notes on timing:

Next: And what about the United States?