For a while, and a rather long one at that, I thought to give up this blog, as I seem to fewer followers than Donald Trump, or even than Herman Melville had after he wrote that book about the whale. That last thought gave me some encouragement, though, for do any of us wish that Melville would have made his decisions based on popularity? As I wandered Ishmael-like through town one day, musing on such thoughts, a friend accosted me in the local bookstore and at some point instructed me sternly to keep putting out installments. And so I will, at least for a while, for one does well to take seriously such small synchronicities, particularly when the blog deals with the rather sorry state of the world. Everyman seems, I think, “in sore need,” and perhaps the astrological perspective provided here may prove helpful to him even if it speaks of matters somewhat perturbing.

In speaking of the “sorry state of the world,” though, I should acknowledge that some people continue to grow in wisdom, compassion, and insight, and that great teachers continue to move amongst us giving instructions to help us navigate the twin labyrinths of world and mind. Despite their generosity, though, global warming moves on apace, a threat to us all, and conflicts large and small seem to have consumed human societies all over the overheating planet. What shall we say of such developments? As David Byrne once said, ‘The further you look into it, the further things stick out.’

To speak of the present, I will reflect back to a book I wrote about the Mayan Long Count a few years ago (The Machine Stops: The Mayan Long Count Through a Western Lens; AFA 2012). In that book, I speak of the curious connection between Mayan time-measurements and the development of what we usually call “civilization” (perhaps euphemistically so-called, as an inordinate number of purportedly civilized human beings often treat their fellows rather un-civilly). I will leave for another time a discussion of what the Long Count horoscope tells us about the model of civilization that has come to dominate the planet over the past five millennia; for now, I will concern myself with what Mayan time-measurements tell us about the present and future. In other words, we will consider the horoscope for the new era, the one that began on December 21, 2012.

In doing this, I should note that it remains unclear whether the Maya felt that a new Long Count would follow from the old. However, in most of what we see around us, beginnings follow endings just as endings engender beginnings, and we can cast a horoscope for anything that begins at a particular date and place. (I do not have a precise time for whatever began on December 21, 2012, so disregard the house-positions.) Here is the horoscope for the new Long Count, juxtaposed with the horoscope for the old one (both cast for Palenque):

Though both horoscopes have powerful yod formations (a central one in the 3114 horoscope; two interlocking ones in the 2112 horoscope), the two horoscopes differ in all sorts of ways, perhaps most obviously in the way fixed signs dominate the 3114 BC horoscope while mutable ones play an important role in the 2012 one. These factors play an important role, of course, and in The Machine Stops, I discuss the connection between the 3114 factors and authoritarianism, militarism, bigness, and planetary illness, matters I will put aside for now in order to focus on the unaspected Mars in Capricorn in the 2012 horoscope. Whereas the 3114 BC Mars pointed, via its sign and aspects, to the wanton destruction linked to misplaced idealism in thrall to assumptions about authority and central control, particularly in connection to religion, the 2012 Mars points to “renegade military groups (e.g. Blackwater, al-Qaeda)” and military units connected with hierarchical structures (Capricorn) acting with complete disregard for international law (e.g. the United States and Israel):

…when Mars operates independently, without aspects, we cannot assume any connection between military and any self-protective functions. Rather, we can expect the military to operate without particular social goals (real or imagined) in mind, a tendency we see more and more late in the [3114] Long Count, particularly in the military ventures of the United States, but also in the aggression of various other renegade groups. We can expect this tendency to increase as we pass 2012, for the symbolism strongly suggests that instead of seeing military organizations as integral elements of the megamachine [that dominated the past aeon], we will see military elements operating on their own. The term loose cannons comes to mind.

The unaspected Mars in Capricorn suggests

…highly organized military groups (Mars in Capricorn) operating largely outside the larger organizational matrix of society, perhaps outside the purview of the nation states or their remnants…We know that many different groups now have access to highly effective weaponry, suggesting the proliferation of organized military groups (Mars in Capricorn); we could see, in the coming centuries, more and more renegade armed groups in all sorts of places, as organized martial energy operates without clear connection (unaspected) to established social trends or legal restriction. Unfettered but disciplined, the energies of Mars can work either tremendous good or tremendous harm.

I suggest that we see the unaspected Mars quite clearly in, as mentioned, the military units of nation who disregard national or international law. Obviously enough, at least to people in the United States, such statements point to the Islamic State and other jihadist Muslim groups; perhaps less obviously to many U.S. citizens, those statements apply equally to the actions of our own military. (We should probably remember, here, that according to many polls, most people on this planet consider the United States as far and away the biggest threat to world peace.) We saw quite clearly in the invasion of Iraq, as we see in domestic developments in our cities, highly militarized units not under the control of any restrictive authority: first Blackwater, then various backwoods militias, and finally one police force after another apparently loosed into lawless behavior.

We can return to the two Long Counts at a future time, but what I’ve said in the previous paragraph leads us directly to factors in the United States horoscope, particularly a factor that I have discussed often both here and in other places: the striking opposition between Mercury in Cancer and Pluto in Capricorn in the United States horoscope. Even the most cursory study of history will reveal to us what that aspect suggests: that the United States, considered as an entity with its own character, tends to play the role of Mercury in Cancer and to project onto others the role of Pluto in Capricorn. 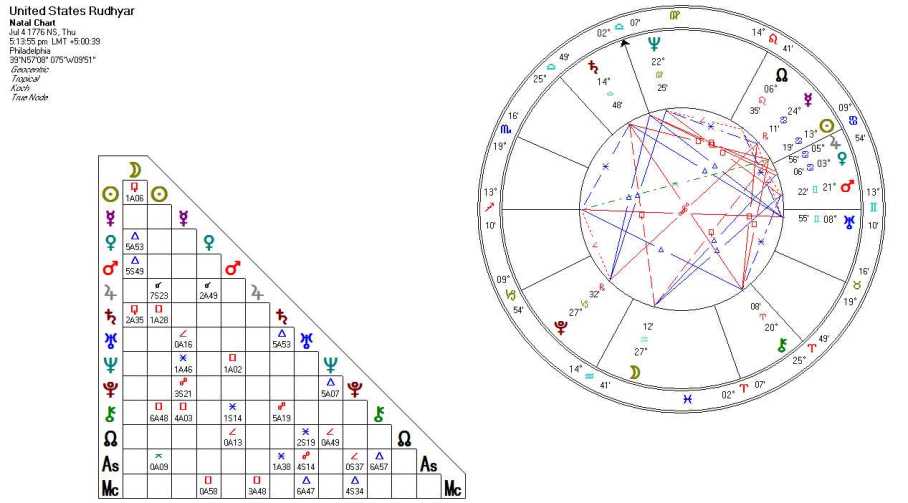 As to the former, the American people seem to like to see themselves as concerned primarily with home and family, with finding security, with personal matters. Yet that security has come to us only because of theft: with Mercury and other Cancer planets (three of them: the Sun, Venus, and Jupiter) either in the 8th house or on its cusp, the United States has bought its security with values and resources stolen from others. The list of those “others” gets longer as the decades pass: first the native peoples of this continent; later, black people stolen from Africa; later still, people in various parts of “the Middle East.”

Those “others” receive the projection of Pluto. The rhetoric used to describe the native people of this continent has a remarkable similarity to that used to describe not only the Islamic State and al-Qaeda, but also all groups in the Middle East who oppose United States’ so-called “interests.” From the late 1940’s to the mid-1980’s, various pundits used such rhetoric to describe the Soviet Union, or the Chinese, or the Vietnamese, or some other enemy-of-the-day. In each case, those who oppose such “interests” (usually financial ones, as suggested by the 8th house: the money or values of others) find themselves depicted as dark, underworld figures; as savages or worse; as people living beyond the limits of reasonable discussion; as people living out their deep resentments and desiring only our destruction.

We can find some truth in all of that, of course. In psychological projection, one can always find a “hook” (Jung’s term) in the person or thing projected upon: that person, entity, or thing will have some of the projected energy already and thus will serve as the hook for the projection of unconscious or unacknowledged psychic energies. Certainly, too, one can create the dark and threatening energy, as has occurred in case after case, through the process of projection itself: if the US treats people as savages and sub-human, and particularly if the US either attempts to exterminate them (as with Native Americans) or treats them as not accessible to reason (as with black slaves, the USSR, and any number of Middle Eastern groups), then eventually the projected-upon peoples will respond, probably bringing to bear long –smoldering and quite-justified resentments . If you keep projecting Pluto onto people, they will appear to act in increasingly plutonic ways: they will seem secretive, destructive, primitive, obsessive, compulsive, and, above all, threatening to so-called “civilized society” even if they have, for centuries – and even through the decades of aggression – lived in rather civilized ways.

Furthermore – and here we come closer to policy questions – you cannot annihilate your projections. If you project your Pluto energy onto a thousand enemies and then try to annihilate them all, the projection will arise, probably more virulently, in another form. Again, a brief examination of US history reveals this even to the most obdurately myopic “patriot” – and the same reasoning applies to US dealings with the Islamic State, the arising of which has such evident connections to US policy and actions.